I have a chronic condition which doesn’t allow me to leave home for more than 12 hours at a time. It’s called “plants”. These plants need watering. And although miceuz’s made a wonderful gadget to remind neighbours of your incompetence you when it needs to be done, it’s not so useful if there’s but a few short evenings to figure it all out and put the thing together.

So, a few weeks ago… 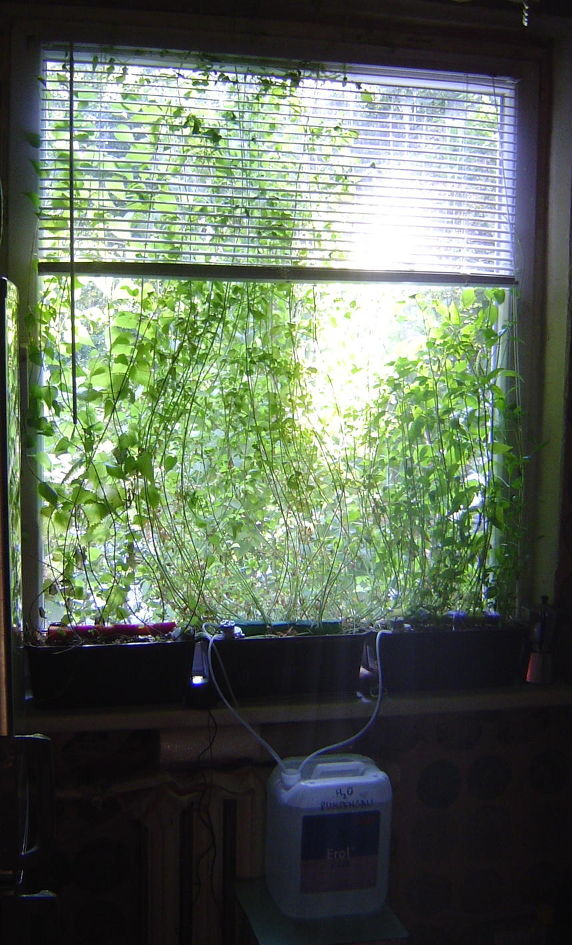 Nettles (on the left) are the most resilient. They can survive for a week with zero attention, and even if they wither, they don’t really die. Pour some water, they’ll start over. I cannot praise them enough to all my green-thumb friends. Make sure you follow the example and put them near a window handle.

Tomatoes (center) and chili plants (right)… not so much.

Dilles (invisible in the sunspot, see last image) are a fluke from last year. They survived the winter and earned their place under the sun. There’s also some citrus tree in one of the pots, but you won’t see it ‘cause it’s small. (I was lazy one day and dumped the juicer’s leftovers into the pot instead of the trashbin.)

What’s this contraption made of? Actually, simple stuff! Most components are readily-available in any bourgeois household, or can be sourced from local sweatshops in the real world.

The above proof-of-concept setup consists of an electric current source, a tiny pump (with genuine hoses), a water source, a pot simulation unit, and a DIY capillary-effect-drip-sponge-thingie.

Here’s a closer view on the second iteration:

The pump I’m using here came from eBay or something, but pwf assures me they can be scavenged from toy dolls that piss themselves when groomed.

In the previous image, you can see I’m using a longer hose (also from the internets). It’s a tad stiffer than the genuine hose, so the pump takes longer to prime, but that can be worked around manually (i.e. suck the output for a few seconds).

I’ve later discovered that a saline solution drip bag (raid the pharmacy) comes with a nice long tube that has a fitting adapter for the genuine hose. It’s fast, cheap, and you get a bag of hangover remedy as a bonus. 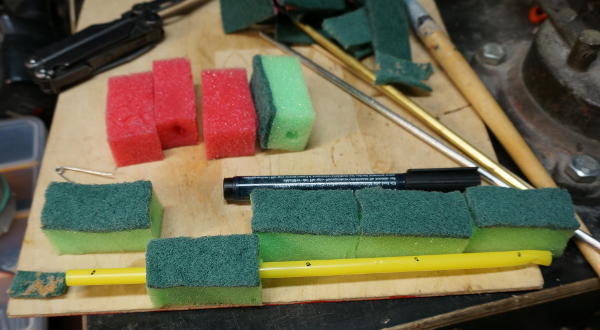 …took a few attempts to get right, but it’s basically a straw with holes, with a water retainer around it. Water comes in at one end, the tube fills up, and (since the other end is jammed) water drips out through the holes, soaking up its surroundings.

Here, I’ve used a plastic cocktail straw and kitchen sponges, but an actual plant straw and some rags can be used just as well, I guess.

For the first two sponge sticks, I’ve removed the stiffer scrubbing surface, but later discovered this is unnecessary and undesirable, as it reduces rigidity. I also figured that holes in the straw can lie on a straight line, so water will only come out when the straw is full (if horisontal). The scrubbing surface is then also useful to mark which side is the “top”.

Here’s a tip: you can’t burn through the sponge with a soldering iron or hot nail to put the tube in. That would melt the porous sponge, making it impermeable. I used a brass tube, sharpened at one end, to “drill” out holes for the straw, in small increments (which is why the sponge is chopped into short manageable parts).

Now, I have three pots to water, and three pumps. I tried finding a power source in our bin to feed all three, but couldn’t. So I used three random chargers instead. 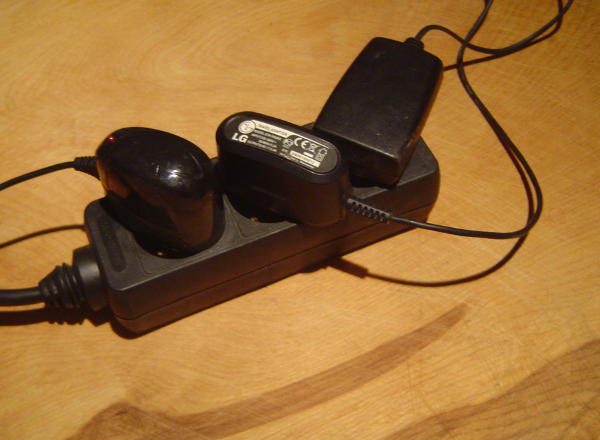 The pumps are rated at 6 volts, the chargers are between 4.3V and 7.3V. I plugged the beefy one to water tomatoes, and the meek one to water nettles.

On the other end of the cable, there’s a household timer like this one: 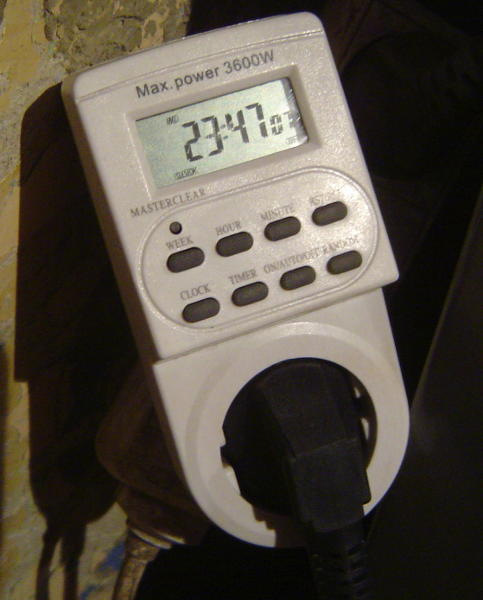 Experimentally I’ve found that my pumps use up half a liter each in about 10 minutes. That’s about as much water as the tomatoes get per 12 hours. However, since it’s not me pouring to each his own over the entire pot, I’ve split the timings into 4 episodes, 3 minutes each. Excessive water usage by the nettles and chili plants is unfortunate, but not game-ending.

I was going away for 2-5 days, so a largish water tank was necessary: 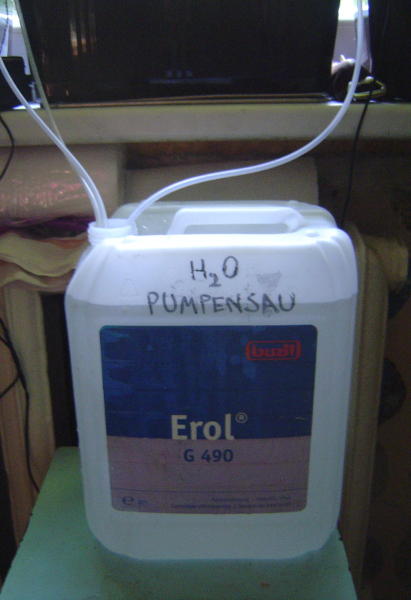 I found this one in a garbage container. It had some washing fluid leftovers, so I washed the toilet, kind of. I’m quite proud of it, being so thrifty and all.

When it came time to install the whole thing, I just stuck the drip sponge in the middle like so (making sure it’s more or less horisontal): 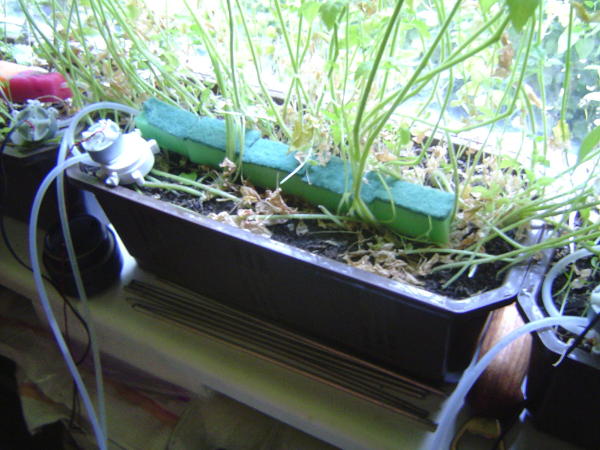 …About four days later, the water tank was empty, but the little green people all survived. 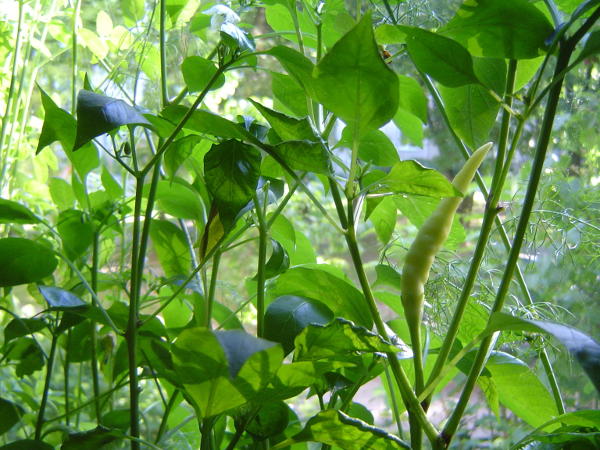 Again, I could’ve used chirp!, but I wanted something very simple very fast. Maybe next time.