Update A new working vesion of plant watering alarm is available for sale! It’s open source and it goes Chirp!

If you want to know where I went after writing all of this, check out these posts:

Well, living together with a person comes with some responsibilities that are to be tackled. Like watering plants. My friend I’m sharing an apartment with was leaving for a couple of weeks and has burdened me with a task to take care of several pots with alien life forms. After i was finished with my pot-growing experiments long time ago, i didn’t care enough about plants and i didn’t expect myself to be out of nerd zone enough to be aware of this task as it’s not cyclic and depends on different external factors such as ambient humidity and temperature. So, i came up with a hi-tech solution: Plant watering alarm that would notice me in non-too-much-intrusive way that it’s time to take care of other species. After some simulation i was quick with a fully working prototype in the first go! 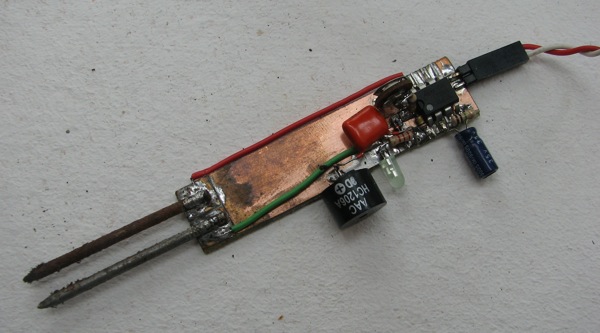 As currently I’m very much in analog electronics and i had heaps of free op amp samples lying around, i went with a fully analog solution as i like things to be as basic as possible. 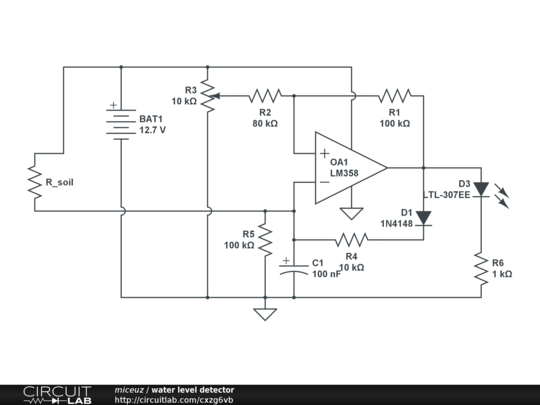 The circuit works as follows:

Electrodes in earth act as a variable resistor, resistance of which depends on amount of water in soil, it forms a voltage divider with R5. While this voltage is above a voltage on non inverting input of op amp, created by R3, R2 and R1, nothing happens. When soil dries out, it’s resistance increases and voltage on inverting input falls below the threshold. Output of op amp swings to positive rail, lighting up a LED and making click in piezo beeper. Voltage on inverting input changes to another value, and C1 is charging up through R4 until it reaches that value. Then output of op amp goes low clicking a piezo buzzer once more, C1 discharges thruough R5 and the cycle repeats. In general it’s a relaxation oscillator with hysteresis set by R2 and R1.

As i have no job and still have no intentions to get one, i instantly saw dollar bills in it. I could make a product out of this and sell it to fellow geeks and whomever else, all i need is to make it battery operated and low on power consumption! I got these extremely low power op amps from TI - OPA379, with input high, the device was consuming 6 micro amps, it could work years on 3V lithium button cell battery!

Well, the devil was hiding not far away. The resistance of the soil in kilo-ohm range, i measured about 500K in extremely dry pot and 10K in freshly watered plant, this means, the main resistive divider would draw 60uA alone, it would drain the battery in 4 months and it’s unacceptable. I’ve had an idea about inverting input by putting a mega ohm resistor from VCC and connecting the plant to ground, buffering and amplifying the voltage by another op amp, but the electrodes in soil act as a battery too, producing ~40mV of voltage, which varies wildly on the type of soil, fertilizers and bunch of random stuff, so i had to scrap the idea. Maybe I’ll try it by measuring capacitance between electrodes. Well, back to microcontrollers…