It was January 18th, 2012, the worldwide SOPA/PIPA protest day. We really wanted to watch a movie. A zombie apocalypse movie. But our test tweeters didn’t have a power adapter, which is probably the reason they ended up in a trashbin. It did have a power connector, but none of our adaptors fit.

Not quite an apocalyptic scenario, but still a distress.

We decided to make a brave dash and solder a pair of wires to where the battery holder is connected (because, believe me, in the face of overwhelming circumstances one never has batteries). Which, of course, didn’t work with a universal switched-mode power supply on the other end, since battery power wasn’t filtered on the PCB.

So we had to bring in another soundsystem. A couple of bigger speakers and an amp. Desperate times call for et cetera.

Next day, though, ioch took a NOKAI phone charger, soldered it to the board, and added a big cap for good measure. I’d post a video of how well it works, but I’d have to put in on YouTube, and doing so might become verboten. 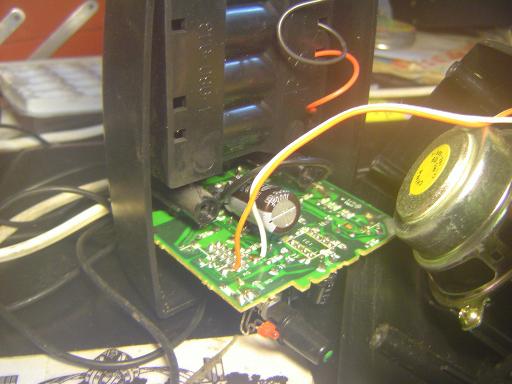 Next week: microwave popcorn and beer in Coca-Cola bottles.