We’ve been working with Atmel AVRs for quite some time now. All in all, it’s a nice architecture, and I can’t really remember why we decided to try out ARMs, and specifically this Cortex-M3 chip. Maybe it’s their built-in USB bootloader. Or their lower price. Or higher processing power.

Anyway, microBuilder’s LPC1343 devboard looked like just the thing, jumped to Adafruit to order some, and… it was out of stock! And wouldn’t be available for some time.

Luckily, a few of these chips just happened to be lying around, and the board designs are available. Not so for all the components, though – specifically, the 12 MHz crystal. Which wasn’t hard to replace. Yet, after a few tries to re-route for homebrew manufacture, it became evident there’d be one via too many if one wanted to keep the nice GPIO layout. So it had to be shipped to a PCB manufacturer.

Perhaps this won’t be faster than Adafruit, but at least it’ll be cheaper. Thanks to the fact it’s all open-source (or whatchamacallit). In case you’re interested, here’s the modified version at GitHub. 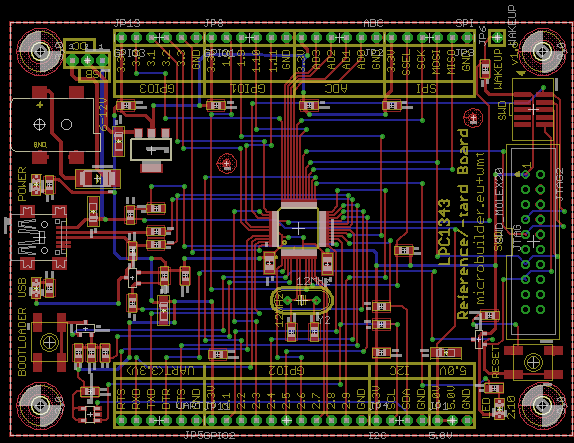