We wanted to bring something of our own to the Burning Man besides the Silicone Meadow installation. Wayward shrines, or stogastulpiai, are traditional micro-shrines erected on pillars next to the settlements and roads at this part of the world. Usually they have religious figures inside, as well as strong pagan elements.

pwf and Ieva had been joking about making an anti-shrine. Me and miceuz thought that we might do something interesting with this idea and eventually decided to make a shrine containing artefacts that would serve as commentaries on the current realities of Lithuania. I did the design part, miceuz was responsible for electronics.

We knew we would be able to use an industrial CNC router in Reno, so I decided to use Google Sketchup to make the model which we would cut out of plywood. Here’s a concept sketch: 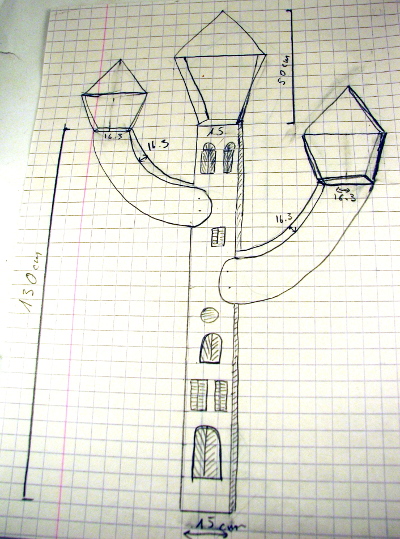 I drew a cactus-like main structure because we were talking about fractals at the time. All the patterns were inspired by actual ethnographic shrines – they’re really beautiful (and short-lived) pieces of mini-architecture. 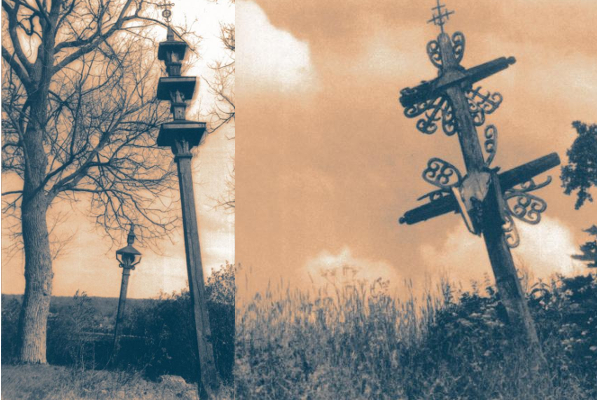 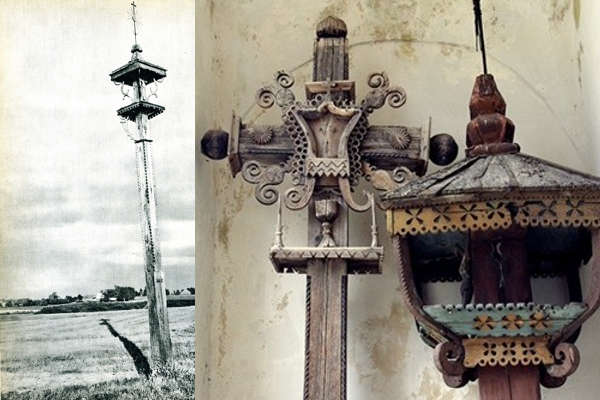 Making the blueprints took me a while, because I had absolutely no experience with any 3D modelling program whatsoever. Here’s the overall model: 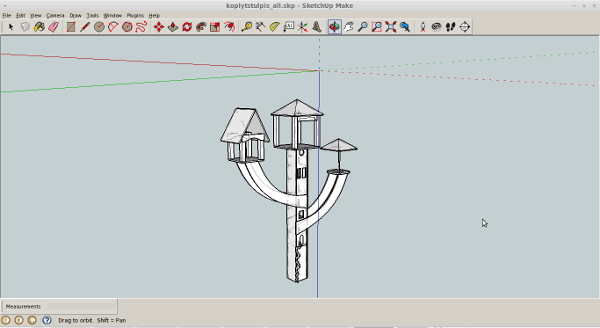 And the exploded elements: 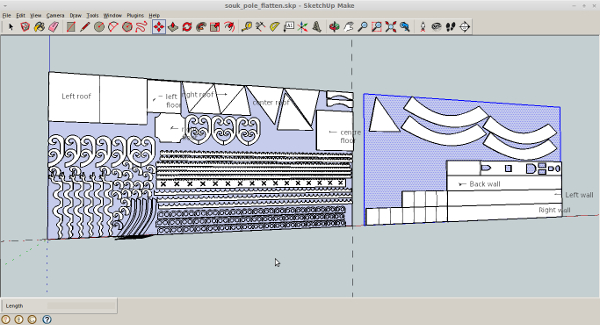 Once we were at the Generator, we cut the parts out of birch plywood. Massive thanks to Jeremy for letting us use his router and all technical and logistical help!

Then pwf, miceuz, dinama, me and kipras sanded, glued and nailed the main three parts of the shrine together and packed them for the journey to the desert. I darkened the plywood surface using the vinegar and iron oxide method. Worked like a charm. Here’s the main pole drying out: 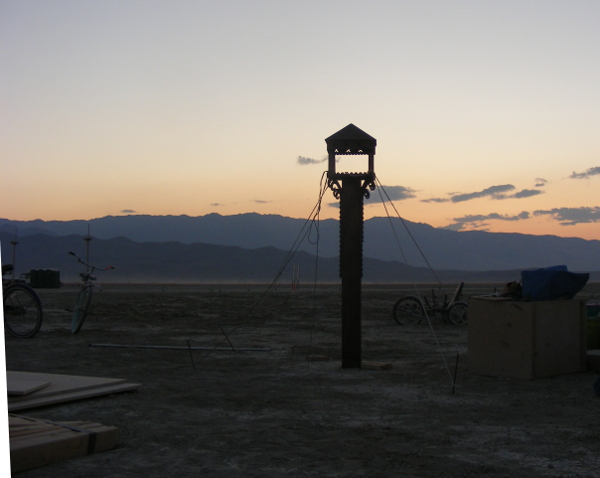 We built the shrine next to our camp. Here’s how it looked at daytime: 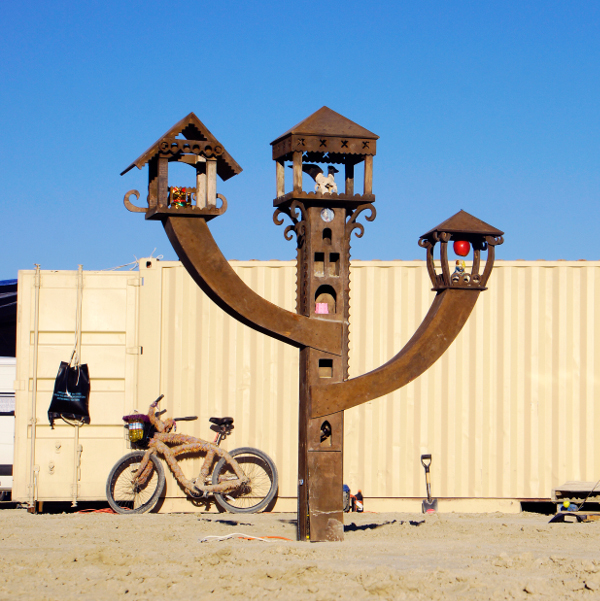 At night, it was lit with an WS2812 LED strip, controlled via a Teensy. We bought a goat skull on ebay and put it inside the main shrine. That seemed like an obvious thing to do (it looked serious and skulls have been the first things that people used to put inside such shrines back in the prehistoric period). 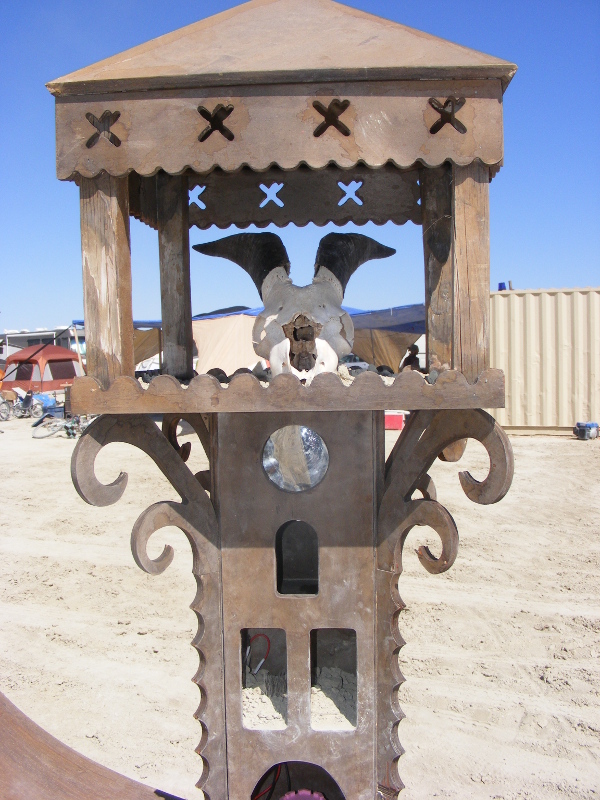 The right shrine housed a battery powered beckoning cat, symbolising the shift of wealth and manufacturing to Asia: 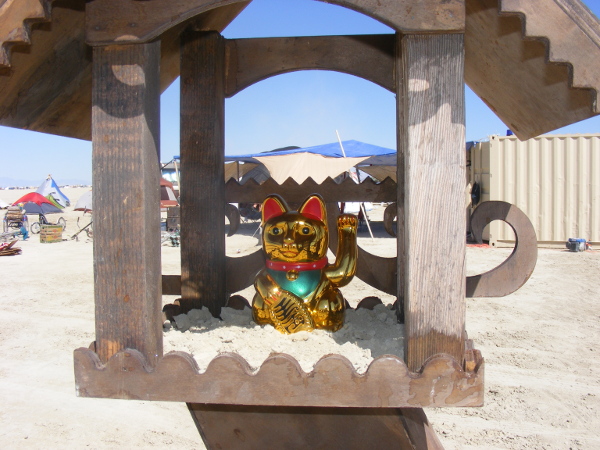 Finally, we put a ceramic figurine of two kissing women with an overhanging red apple to the left one, symbolising the erasure of predetermined, absolute morality norms and the concept of sin. The apple was supposed to dry out without anyone biting it. 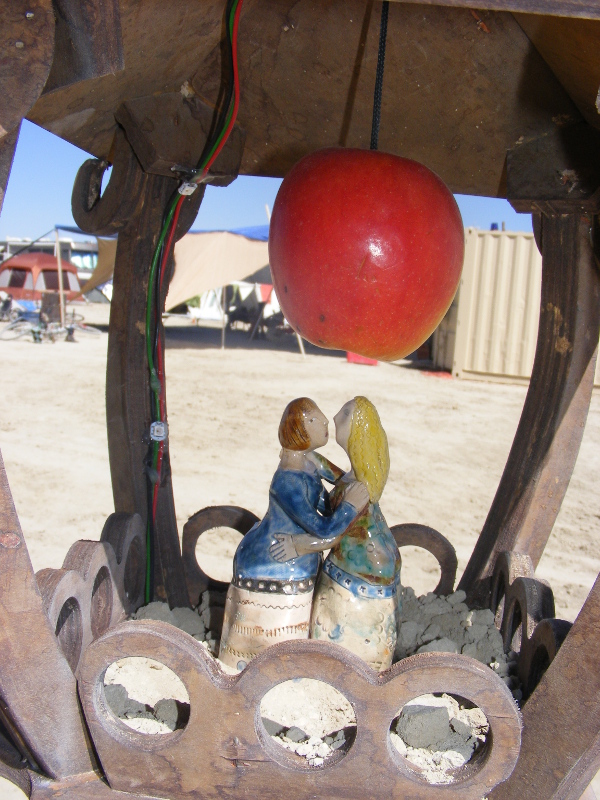 There were several other artifacts inside the small compartments of the shrine: a small infinity mirror, a dried cheese, a small bottle of vodka, a tiny version of the silicone meadow, a 3D-printed Gediminas’ Tower. I used this model as the basis for the printed one. I was quite happy with this project in the end – after all, learning the basics of 3D design subsequently proved to be useful. Also, I always liked this painting. 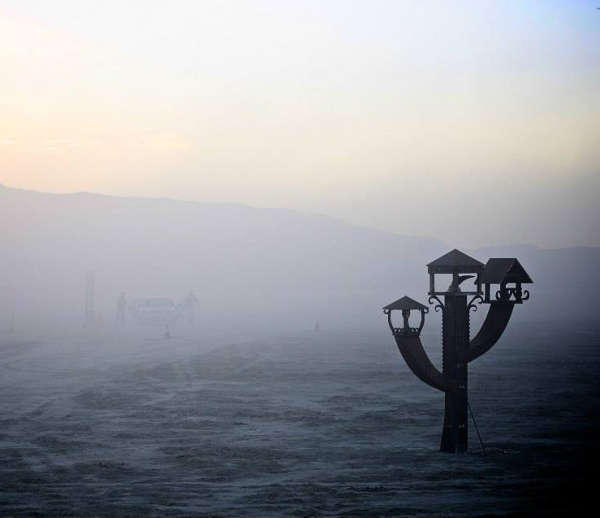 The end of this story was funny. A nice semi-naked Asian lady had become enfatuated with the shrine. Surely, we were happy to give it it to her. Here’s miceuz carrying the load to her camp: 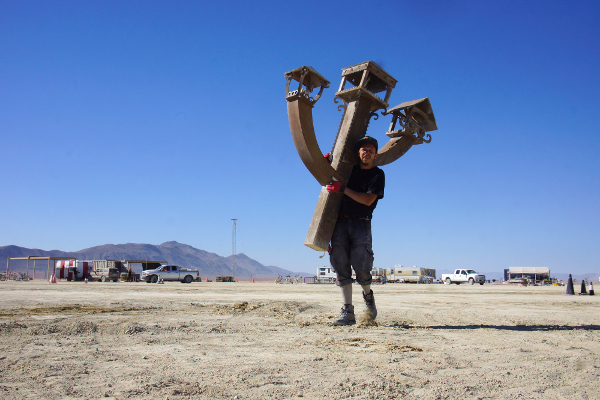 Unfortunately, the lady in question apparently was too spaced out to arrange transportation to the city she lived. Eventually we had to bring it back, cram it into our shipping container and leave it up to the folks who will go to the Burning Man the next year to decide what they’ll want to do with it.