I had an opportunity to take a good look at the innards of a (used, negative) electronic pregnancy test.

Later one is supposed to piss on the probe (urine is unhealthily clear in this picture) or stick it into a small container with an urine sample:

One’d see the result in the tiny LCD screen in 20 seconds or so.

The case could be opened easily. I sticked a coin into its rear and turned. Spilled a couple of tiny Vinnic L736 1.5 V batteries: 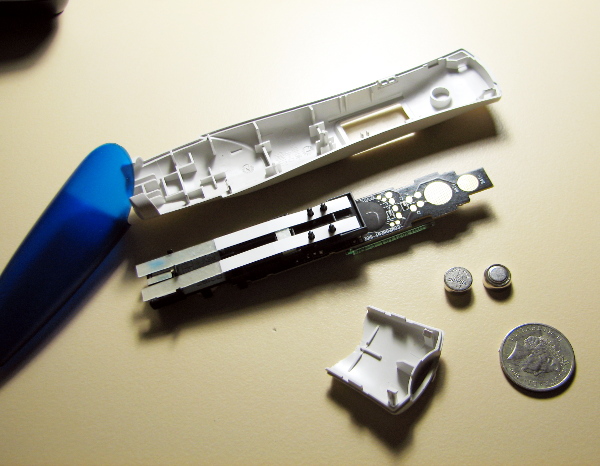 The top view. The LCD screen, moisture absorbing material (the brownish pill), the back of the PCB. 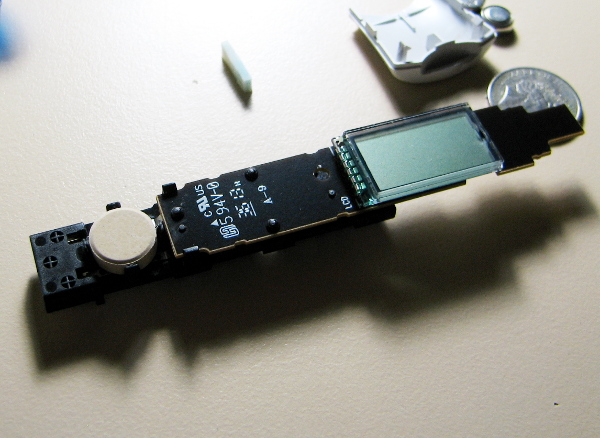 The PCB – the tiny LCD screen is at the bottom. The microcontroller is coated in some black glop, and obviously everything in this area is patented and closed-source. The probe side is at the left. Basically, when the probe gets wet, the circuit closes and the test starts. It is a so-called lateral flow test, presumably detecting and measuring the concentration of the human chorionic gonadotrophin hormone that is initially produced by the embryo.

The stripes you can see in standard, analogue pregnancy tests and in the fourth picture are areas of the sporous pads where the target molecules and their antibodies that had been bound in the porous material accumulate. I think there are two control stripes on each of the two pads, and the test stripe that turns blue if a person is pregnant. This test should show the stage of early pregnancy too, apparently by estimating the concentration of HCG. 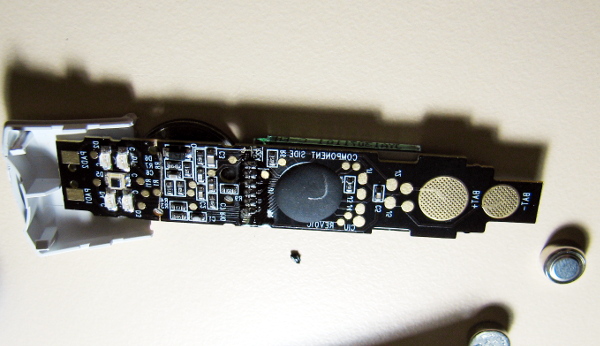 I’m not sure about the exact method of test result analysis, but there are 4 diodes that would be directly underneath the 4 stripes on the pads, and a tiny CCD camera between them (maybe with another diode, marked D5 on the PCB). I think that the test works by detecting the change in LED light absorption with the CCD.

I’ll keep the LCD screen and the case. Might be fun to find another microcontroller, write something about a hybrid mechatronic baby and leave it somewhere.

Also, here’s some history of the middle XX century pregnancy tests: doctors would inject infantile female mice/rabbits with the urine of the subject, and then would dissect the animals, checking for presence of ovulation. Later on frogs, which did not need to be dissected and could have been kept alive, were used.