Konica C35 is a 35mm compact rangefinder film camera released in 1968. It has a CdS photoresistor based light meter which controls shutter speed and aperture. To power the meter the camera takes a single PX675/MR44 1.35V mercury cell, which was common at the time. The camera uses miniscule amounts of current, no more than 1mA, and only when the lens-cap is off, so the batteries could last years. The problem is that this kind of battery is banned due to environmental concerns about its mercury content.

The FED Mikron 2 shown in this picture is C35’s slightly bigger and bulkier ukrainian brother. Its meter works the same way and it has the same battery problem, as do many other cameras of that time.

The metering circuit is very simple. A voltmeter is connected in series with the photoresistor and battery.

The camera also has a film speed (ISO) setting, controlled by a ring around the lens, which doesn’t have any corresponding element in the schematic. That is because the ISO setting selects an aperture for the photoresistor (which is directly above the lens), decreasing the amount of light that reaches it. 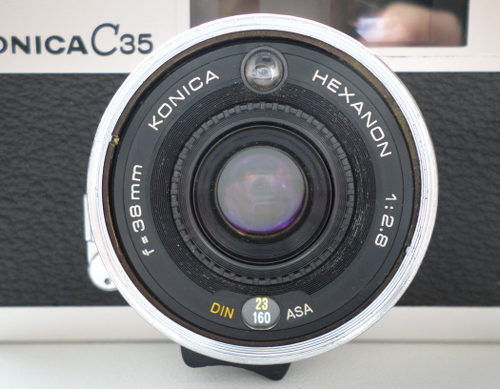 The photoresistor’s resistance changes from basically an open circuit in darkness to very low in bright light. The change is non-linear, but the shutter mechanism takes that into account. The voltmeter’s needle is visible in the camera’s viewfinder and is mechanically coupled to control the shutter/aperture mechanism. In the picture below the needle is at the very bottom of the scale because the camera is without a battery. 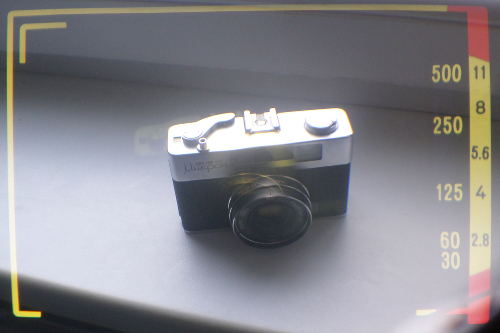 The accuracy of this system depends on a constant voltage source. The PX675/MR44 battery has the same form factor like LR44 alkaline and SR44 silver-oxide baterries, but a voltage of 1.35V which stays basically constant until the battery is almost completely discharged and then it drops off sharply. This characteristic makes it suitable to be a reference voltage.

Zinc-air A675 cells can be used as replacements because they have a voltage of 1.35V too. They are usually sold as hearing-aid batteries. But they have one drawback: short operating life. They use air for the reaction and discharge in a few months even when they are not being used, which is far from ideal.

On the other hand SR44 silver-oxide cells have similar discharge characteristics and long shelf life of mercury batteries, but a different voltage, 1.55V. This 0.2V difference can make the camera overexpose by a few EV. This can be compensated by setting a lower ISO on the meter, but that is not always accurate. A more accurate way is to insert a 0.2V drop diode in series into the circuit.

Note that common alkaline LR44 cells are not suitable for this, because their voltage decreases as they discharge.

Diode forward voltage drop depends on current and temperature. The current dependency graph for various kinds of diodes is shown below. The graph is taken from a very thorough article about mercury battery replacement on butkus.org. 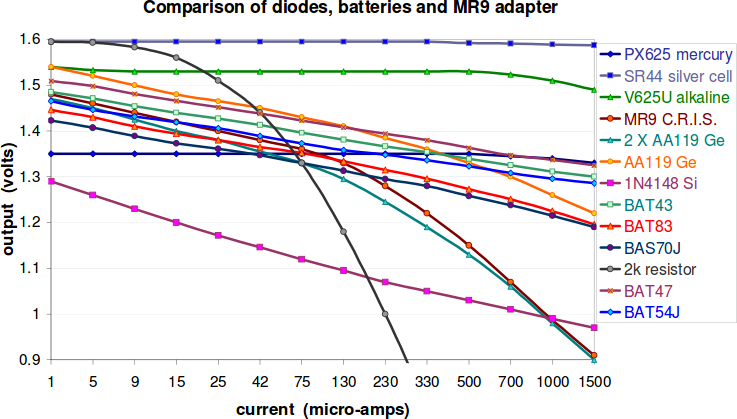 There is also a line for a 2k resistor in the graph. It is nonlinear and steep around 1.35V, which is why a resistor is not suitable. This is also the reason the ISO setting is implemented using apertures and not resistors.

I chose to use a BAT43 Schottky diode, but the best choice depends on the camera and how much current it uses. BAT43’s forward voltage drop graph is shown below (taken from the datasheet). 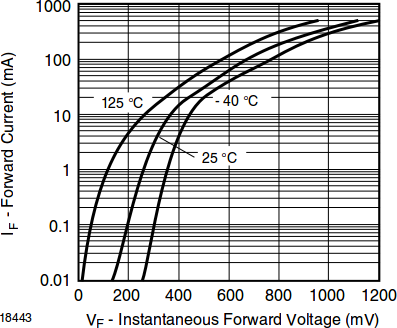 Solder the diode between the terminal and the wire. Make sure sure the polarity is correct (this is the positive terminal of the battery). 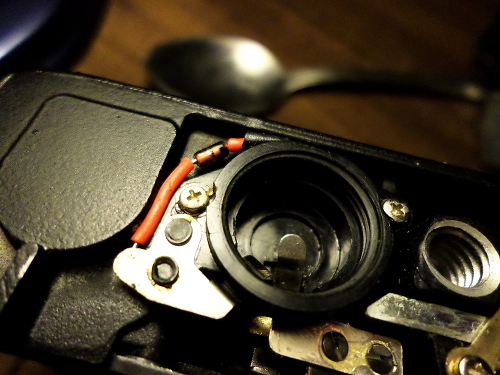 That’s it, the camera can now be used with a silver oxide battery. I haven’t tested with film yet, but the meter seems to be working properly.