I first thought of buying a pre-made 19-inch rack mount case, 3U high, 19 inches deep, but those were unavailable locally, and shipping such a large item would cost a fortune. Even if one was available, I’d still have to cut out holes for screws and air vents, which would take too much time.

Instead, pwf suggested I order a custom-made one, cut out with a water jet and folded at a shop that specialises in doing just that.

The shop needed an AutoCAD .dawg file for their machines. I don’t have AutoCAD, so used FreeCAD instead. It went better than last time, especially since this time I used its sketch feature and constraints a-la SolidWorks.

But it doesn’t export directly to .dwg, only .dxf. Draftsight can handle both, though, so I exported to .dxf in FreeCAD, imported that in Draftsight, moved things around to coloured layers, exported to .dwg and sent the file to the shop. A little convoluted, sure. The files are available here.

The shop didn’t quite do it by-the drawing, since I didn’t include a 3D view of what I was expecting. (DraftSight is essentially AutoCAD for 2D, at least the free version.) Also, I made some poor design choices in my drawing, so there was more work to do on the case than initially anticipated.

First, I didn’t specify the bending radii, and didn’t account for the thickness (1 mm) of the sheet metal in the cutout. Then, I went for the bottom-and-four-sides being one piece, instead of bottom-and-two-sides, so the shop couldn’t fold the box perfectly. I had to align it up before welding two adjacent sides.

Also note that had I gone the bottom-and-two-sides + top-and-two-sides route, no welding would have been necessary. Maybe I’ll fix that in some future revision of the drawing, if I ever need a 19” rack again. 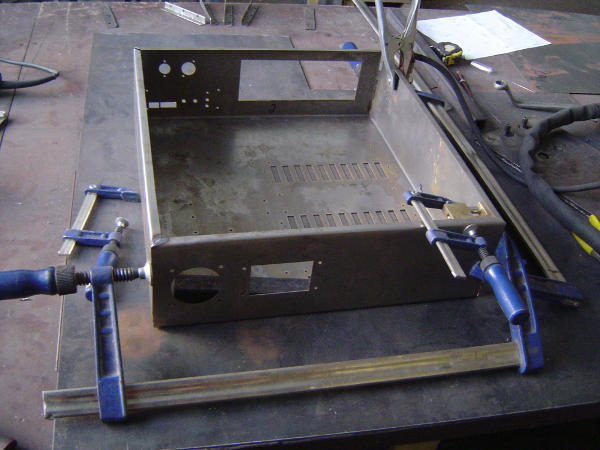 Sheet metal doesn’t dissipate heat so well. To prevent warpage, I clamped in a brass “heatsink” on the backside: 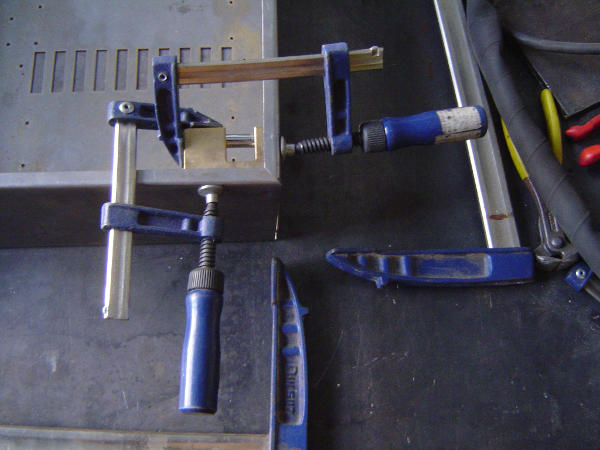 Clamps are good arm rests, too: 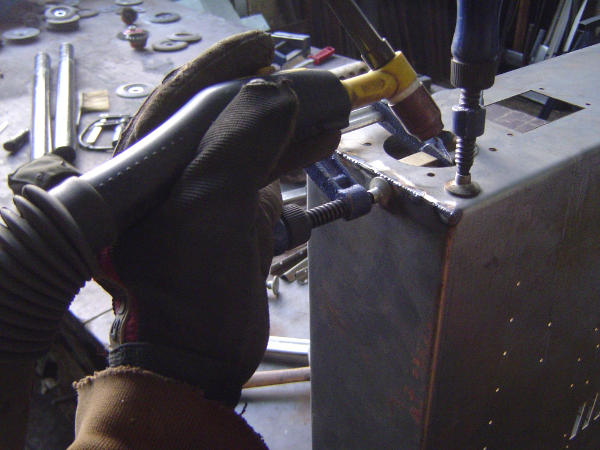 I also didn’t include two mounting brackets for the DIN rail holding the circuit breakers, so had to hammer those out and plug-weld them from the front side of the case: 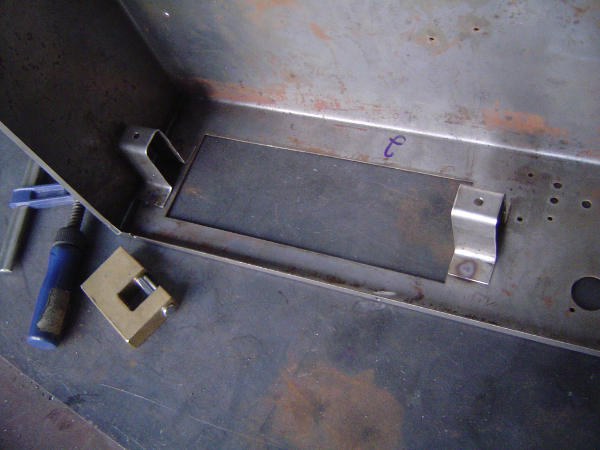 Then, I forgot to include screw holes for the top, so had to drill and tap those. Here’s how it looks: 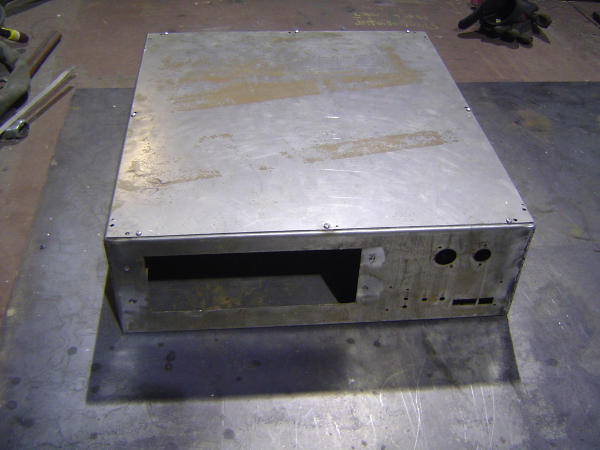 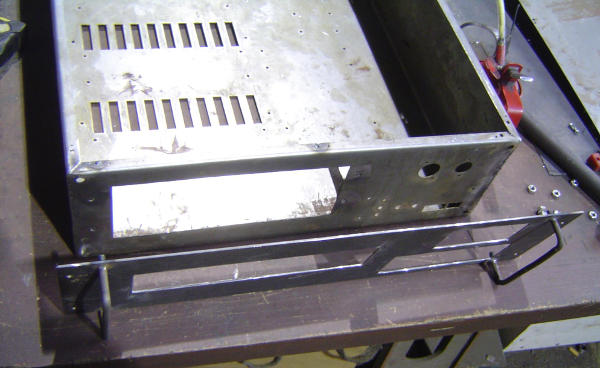 Cleaned the case, covered in primer, painted black. Got no photos of that.

Mounted the electonics inside. The bottom looks screwed: 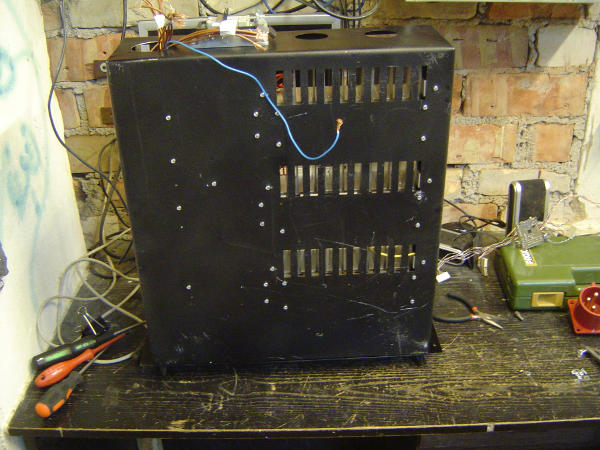 Those rectangular holes are for air flow, they’re right beneath the triacs’ heatsinks. 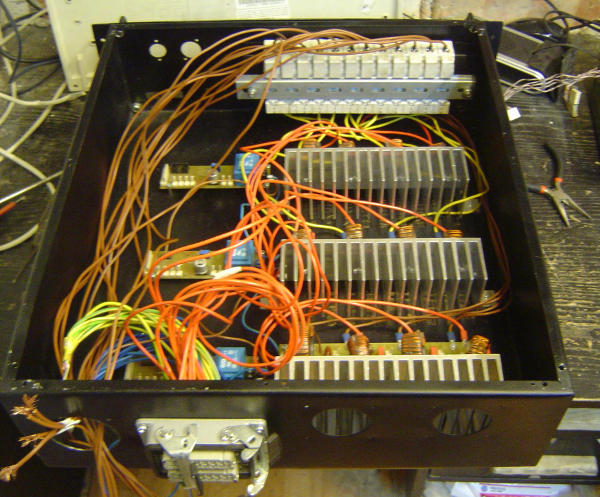 The wires were a mess, tidied them up with zip-ties, attached to these neat little adhesive zip-tie holders: 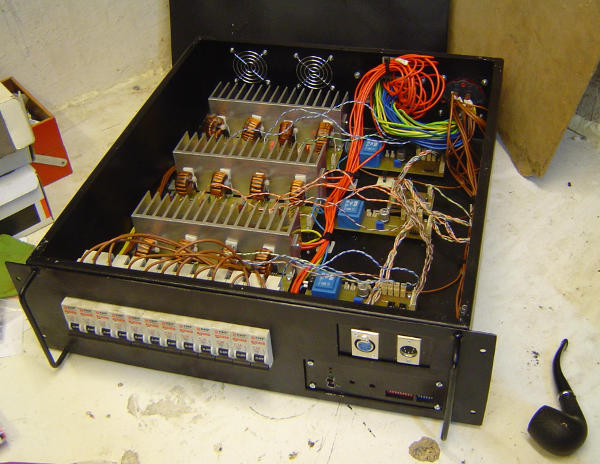 The original Sherlock Holmes Pipe is included for size comparison.

That’s almost it! Once I get to run a final power test, with the top lid screwed in place, I’ll do a final rant, promise to update the schematics, PCB layout and case drawing, conveniently forget all of that, and move on to other extremely time-consuming stuff.