I’ve got this old Mercedes-Benz 207D camper minivan. It’s a proper minivan, owned in its better days by a bourgeois deutchlander. Which means it’s fit out for short summer trips, with crammed living quarters and half the back taken by a toilet room. The toilet itself, of course, is missing. No heater, no insulation.

Or at least it was like that, before I decided to tear it all up and re-purpose it for year-round van dwelling.

Removing everything down to the panels revealed some rust. so I decided to get to the metal frame, which revealed considerable rust, especially around aluminum rivets. Before you know it, the van has no windows, no dashboard, half the engine bay is stashed in boxes, and I’m struggling to separate the pitman arm from the tie rod. Not that there’s something wrong with the steering – I just need an empty metal shell to work with.

A few words on what I’m trying to do. Have you seen Sylvester Stallone in “Over the Top”? Then you’ve seen nothing. One can not just wrestle with a pitman arm. It is tough and made of steel. It is wedged in beyond any specs by righteous muffins. It is hammered in even more by every rock rolling on the road.

And I could have gone and bought one, but decided to practice some TIG welding instead. I’ll need this skill anyway by the time I replace every rotten bit of the van.

The results, sadly, are negative. Maybe since it’s all made of scrap metal I found under the table. Here’s the first version: 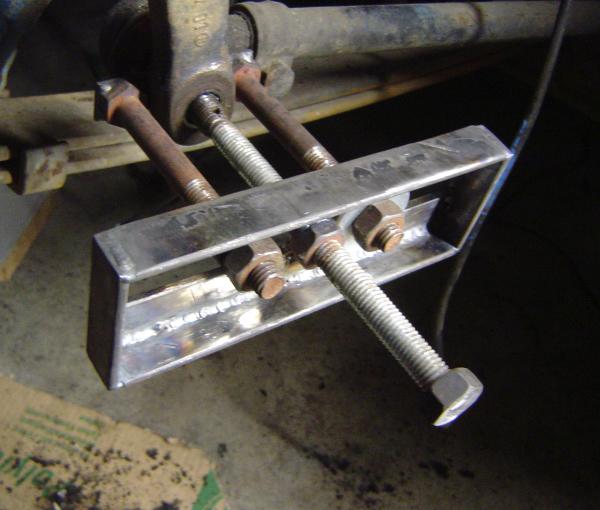 The middle screw is the pusher rod. Two screws on the sides have flimsy grips. Turning the middle screw pushes on the ball joint finger, grips pull the pitman, and it comes off. Or such was my idea.

In reality, the grip screws bent sideways, their grabbing plates had bent, too, and nearly slipped off.

No biggie, replaced it with a single piece of 5 mm plate, cut out in a suitable shape, that attaches like so: 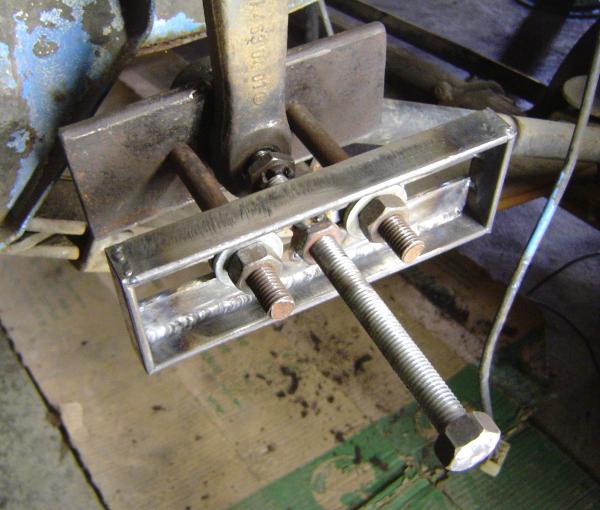 Looks a lot more solid, eh? It had bent, too. A little. I kept on pushing with a hand wrench, since the pneumatic would only hiss at this point, until the screw would turn no more, and the head snapped off: 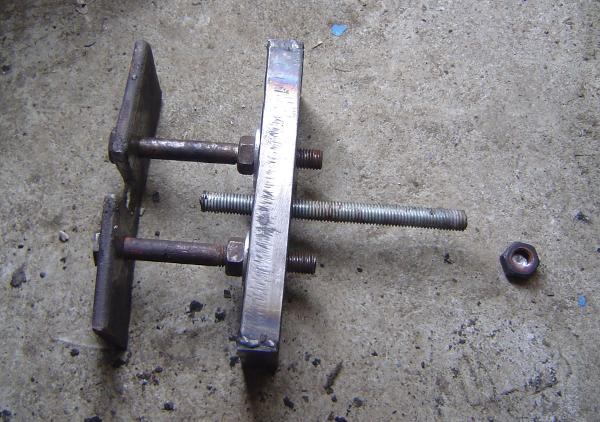 Oh well. Pitman is strong. I’ll either have to further refine this thing – shorter, stronger screws, a metal ball from a bearing to reduce friction, and so on – or just scrap it and buy a “real” one.

Or maybe cover it all with a black bag and pretend it’s not there while I’m working on the body.