So everything that had to be done was a translation from DMX512 (the console) to Modbus (the VFD).

I took my trusty Metaboard and meditated. Quite conveniently, both DMX512 and Modbus are RS485 protocols, so a 75176 interface chip for each is all the hardware that is needed. Here’s the schematic I drew then and fished out from under the desk now. The table on the left is for bookbinding signatures and absolutely unrelated. 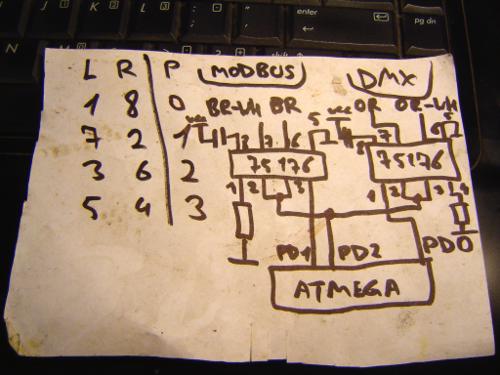 Writing the code was pretty simple, since I took most of it from the DMX dimmer project of mine. Which is going slow and steady, thank you.

The rest, dealing with Modbus, required a skim through the VFD’s manual, and is pretty much hard-coded. I let myself do this, since the goal was to see if it can be done at all, and the finished thing needed only to have speed control, nothing else. A lot more is possible, though, with the mentioned VFD. If I had to do that, I’d probably go with FreeMODBUS, a library for a number of embedded architectures.

To simulate a lighting console, I used QLC (software) and ENTTEC’s DMX USB Pro (hardware). Keep in mind that if you want to use this setup on GNU/Linux, the former uses a not-invented-here approach to communicate with the latter, and you might need to blacklist the ftdi_sio kernel module.

Keeping the story short, after 6 hours of copying code around, I came up with this slackjob proof-of-concept to control an AC induction motor using DMX, taking a few givens for granted. Mind you, a VFD for industrial automation is quite more common (and, therefore, cheaper) than professional theatre special effects equipment that does the same thing.

The last move I made was film it all, once, on the first camera that happened about. Here it is, in all its pixelated, shaky, moory glory.

And yes, I do call that a workshop.