I got my dirty hands on this nice fixture, a Martin Atomic 3000 DMX stroboscope. What exactly happened to it is shrouded by mystery, since it happened too long ago for anyone to remember. Some facts, though, were relayed as follows:

Here’s the part of PCB that took the damage: 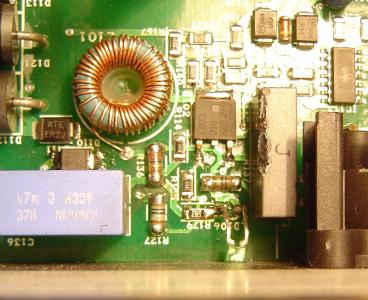 A short browse gave a few threads with similar issues: one looking for a schematic and another asking for advice.

A schematic, indeed, is only available from Martin if you’ve passed some sort of ritualistic initiation. So I went on the internets’ underside and found it, and here’s the relevant part: 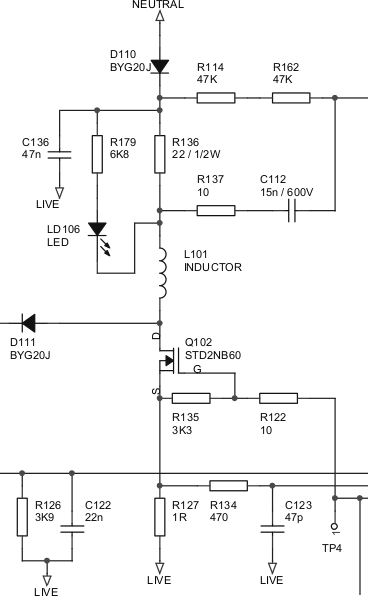 And oh Abyss, those two resistors, put butt-to-butt, form a spark gap between LINE and NEUTRAL!

The thing about light fixtures is that they’re often used indoors. Indoors is often poorly ventilated. There is a lot of dust, which gets everywhere, especially into spark gaps. I’ve seen dust inside stepper motors, too, between the bearings of fans, covering heatsinks and integrated circuits to the point they can’t be seen!.. The horror, the horror…

Anyway, there’s not a lot that can be done except for regular cleaning (yeah, right). I’m sure Martin has also fixed this in their later revisions of the PCB. After all, the one in question is way back from 2001.

I couldn’t have not indulged myself, though, in the following way: 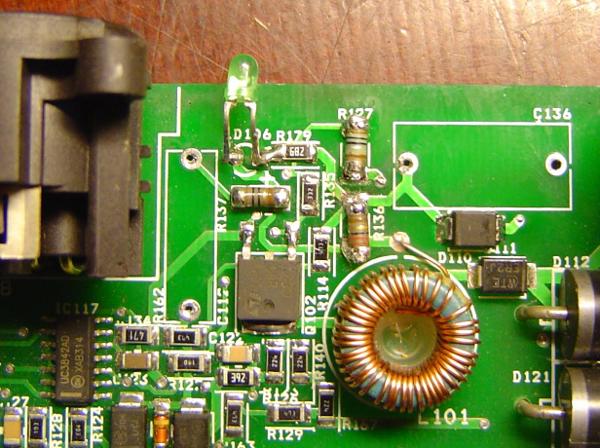 Correct, it’s a bigger spark gap. I also changed the caps. And wiped off the rosin residue. The solderwork looks sloppier than it was before.

Back to the issue at hand: why does it keep blowing the fuse? Well, it’s because not every fuse will do. You need a slow-blow fuse, says so in the manual. Martin can supply those for you, catalog number 05020040.

This is because the strobe draws up to 33 amperes at peaks, which happens when you run it in full-power mode with the blinder effect.

We’ve measured it with this: 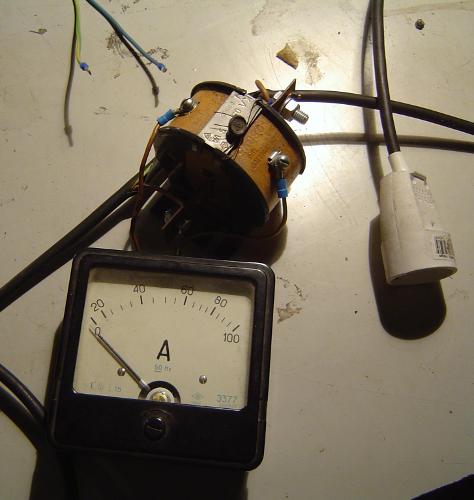 It’s a current transformer and a meter. The good thing about this is it shows effective current through the wires, not some derivative. When the strobe runs in normal mode, it draws current in bursts, and modern meters that measure magnetic flux would show all kinds of weird, like jumping fast from -50mA to 50mA, with the amplitude ramping up, eventually to 150A. Which can’t be true.

Anyway, with this setup, we’ve measured that the device draws very little on average in normal mode, around 18A in half-power blinder mode and well over 30A in full-power blinder. Mind, though, that this doesn’t last for long, since thermal protection kicks in and decreases lamp glow intensity – by limiting current.

The ultra-high power mode, though, lasts for a few seconds, which is enough to blow a glass fuse, even if it’s slow-blow. But a ceramic one can tolerate this. According to the datasheet of the one we bought, at 200% of the ampere rating, minimum “opening time” is 5 seconds. Which is probably enough.

So much for this “failure mode”.