While the conscientious crew was spreading maker fear this weekend, I finally got around to doing some home improvement.

I found this crappy torchièr in the dumpster a couple of years ago. It was lacking shades, so I wrapped some aluminum foil around the bulb, and that’s been my reading fixture ever since.

Recently (about 1,5 years ago) I found another one, mostly identical to the first, with a more stable base (that is, a larger piece of concrete). It, too, was lacking shades.

So, I stripped the insulation off of some power cables that were too short to use anywhere else. (More on that in a different post.) 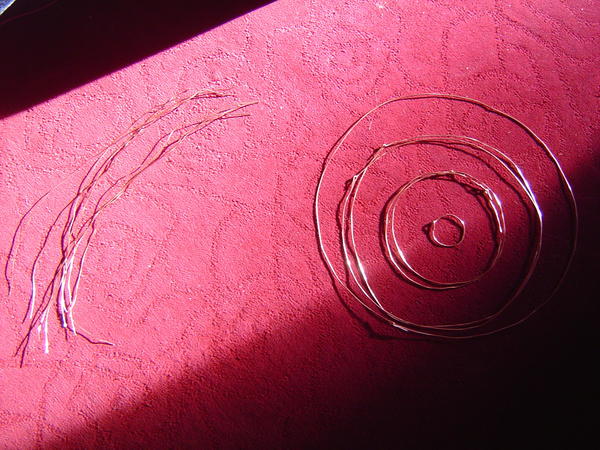 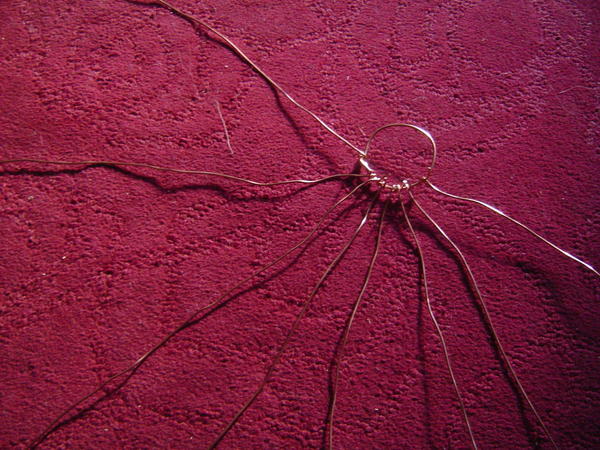 … straightening it - not so much. I’ve only done this a few times before, and even then never had to affix the wires to each other. Wrapping them is a lot of work, and even then there’s too much slippage.

At some point, the thing started to look too much like a dream-catcher for nightmares. 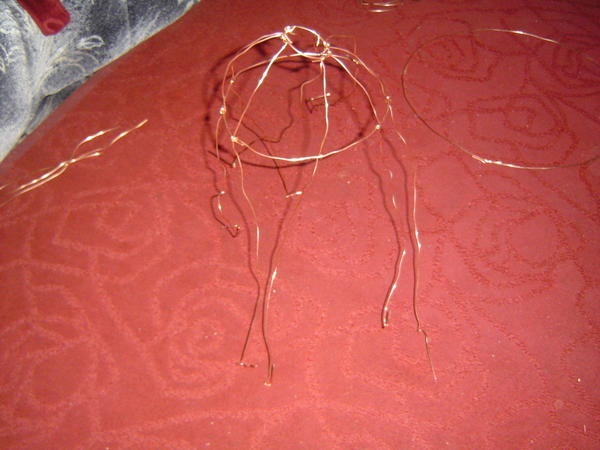 The globe wireframe certainly didn’t work. It crumbled under my gaze.

So I tried concentric circles a-la gyroscope instead (the mickey mouse shape on the bottom theoretically threads onto the bulb socket): 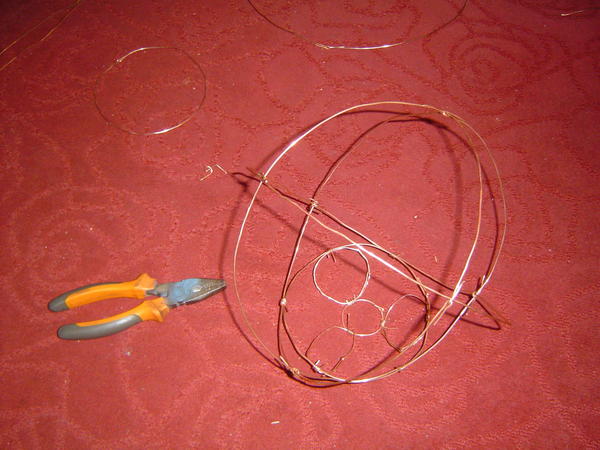 Pretty good! But still takes too long. I was kind of wishing for a rolling mill and a spot welder by then, but settled on a known-round shape and a soldering iron. Took apart the hand-wrought “orb”, too - copper is precious, and there’s only so much to go around.

In comes the torchièr base: 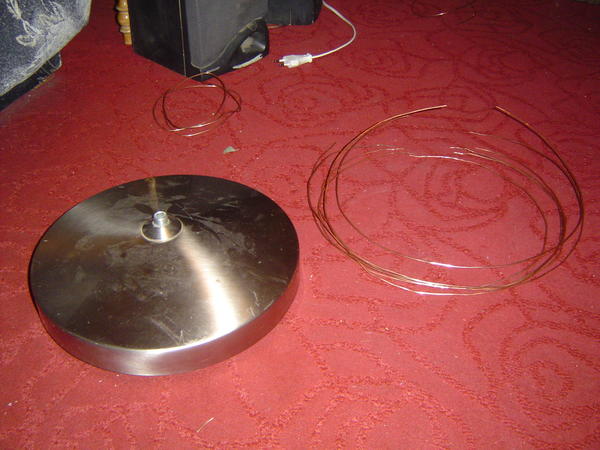 Post-factum, I probably should have used the paper bin instead. It’s slightly conic, and would have produced concentric circles of ever-so-slightly bigger size. Easier to fit into one another. 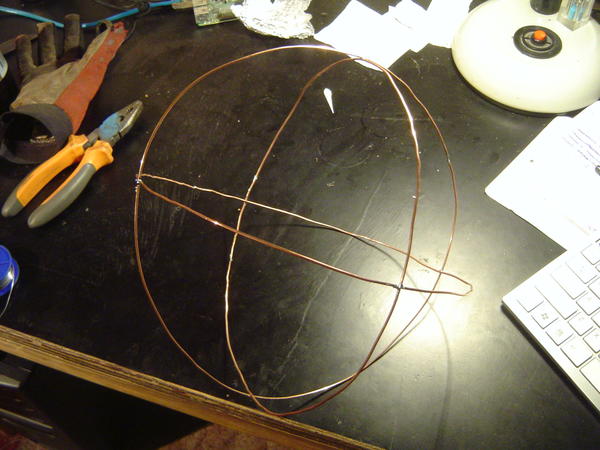 Again, it took a while to make - a vise or such would have helped. After that, though, adding more circles is a breeze. Here’s a total of seven: 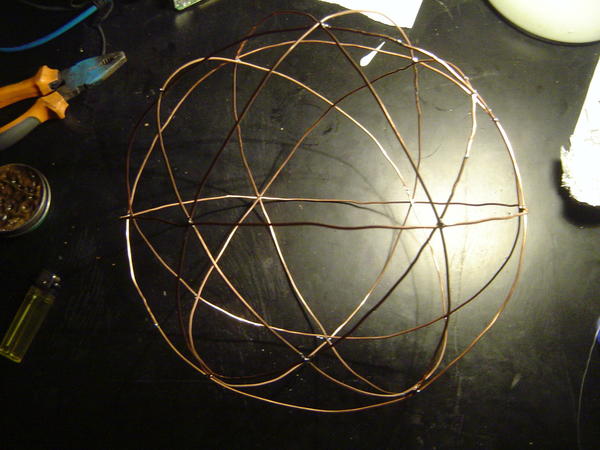 Not exactly geometrically homogeneous, but certainly not lacking is symbolism. 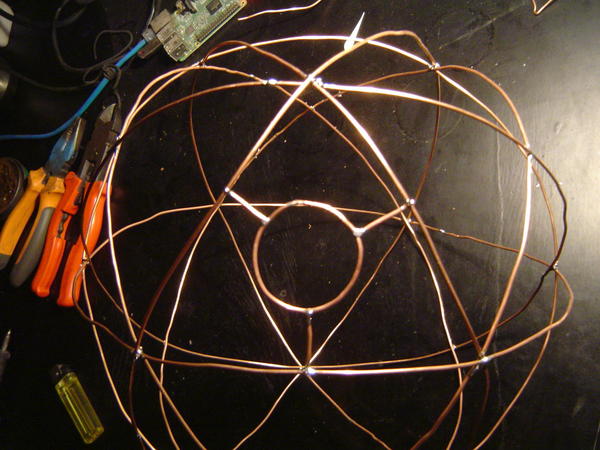 That “socket thread” looks kind of like a quasi-mystical cult symbol of some sort. Coincidence?.. I don’t think so.

For the actual shade material, I used a quarter roll of painters’ tape. Rolling it on was a grind, have some tubes ready if you’re going to repeat it. 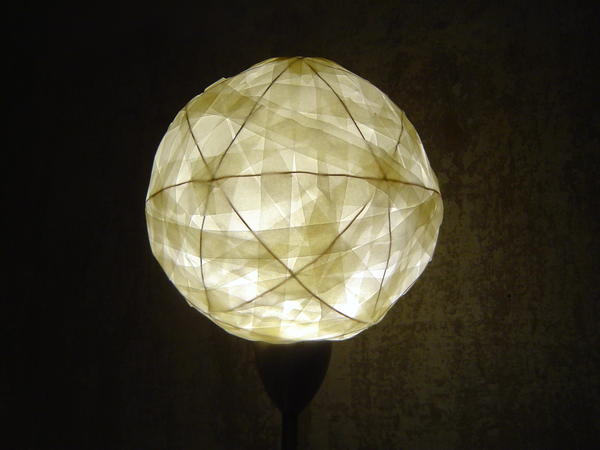 There! No arduino, no wifi, no spinning motors, no RGB LEDs, no dimming, no 3D-printed parts. Switch-operated. Probably a bug trap. Casts a light triangle on the ceiling.